Land Surveying History and the Surveyors Hall of Fame

By 1749, convinced that settlements were essential to controlling lands, the English colony of Virginia was promoting western expansion by offering speculators 1,000 acres for every family they could place. That year, at the age of 17, an ambitious George Washington was appointed as the Surveyor General for Virginia. He was hired by Virginia’s greatest landowner, Thomas, Lord Fairfax, and was appointed Surveyor General by the College of William and Mary. The College was charged with the appointment of Surveyor General, as well as the examination and licensing of surveyors, and had been since February 8, 1693. Prior to that time the appointments had been made by the King of England. George Washington also became the first Registered County Surveyor in America, that same year (Culpepper County, Virginia).

After three years, George Washington knew western Virginia as well as anyone and was well aware of its great value. For the next several decades, he pursued two intertwined interests, military arts and western expansion.

Another famous Surveyor General for Virginia, Thomas Jefferson was also appointed as County Surveyor for Albemarle County, Virginia on October 14, 1773. During his tenure as Secretary of State (under President Washington) and as President, Jefferson’s instructions and appointments of surveyors to official posts gave the young nation the foresight and direction necessary to promote the orderly settlement of the frontier.

Abraham Lincoln was born in Hardin County, Kentucky, on February 12, 1809. He moved with his family to Indiana in 1816 and to Illinois in 1830. His first home in Illinois was eight miles southwest of Springfield, and there he operated a general store and served as Postmaster and Deputy County Surveyor in 1833.

He served as a Representative in the Illinois State Legislature from 1834-1842. In 1836 Lincoln was admitted to the bar, and in 1837 he moved to Springfield and began his law practice. He married Mary Todd in 1842 and purchased his home at Eighth and Jackson Streets in Springfield two years later.

The mission of the Lewis and Clark expedition of 1804-1806 was to explore the recent Louisiana Purchase by “ascending the Missouri River, crossing the ‘highlands’ and following the best water communication to the Pacific Ocean.” Meriwether Lewis, the personal secretary to President Thomas Jefferson, spent two years planning the expedition. William Clark, another experienced outdoorsman, was a surveyor and mapmaker.

On July 31, 1804, they took a meridian altitude and calculated the Latitude of their position to be 41 deg. 18 min. 1.5 sec. North. Latitude was much easier for them to measure than Longitude, as they had no accurate timepiece, which is needed for determining Longitude. However, they were able to estimate the distance traveled each day with considerable accuracy and, combined with compass and latitude, allowed them to make good maps.

“August 28th, 1805: Having now crossed more than once the country which separates the head waters of the Missouri from those of the Columbia, we can designate the easiest and most expeditious route for a portage: it is as follows. From the forks of the Jefferson River N60deg.W, five miles to the point of a hill on the right: then S80deg.W, ten miles to a spot where the creek is ten yards wide, and the highlands approach within 200 yards; Southwest five miles to a narrow part of the bottom; then turning S70deg.W, two miles to a creek on the right: thence S80deg.W, three miles to a rocky point opposite to a thicket of pines on the left: from that place West three miles to the gap where is the fountain of the Missouri; on leaving this fountain S80deg.W, six miles across the dividing ridge, to a run from the right passing several small streams; N80deg.W, four miles over hilly ground to the East fork of Lewis’ (Lemhi) River, which is here forty yards wide.”

The party resided at a wet Fort Clatsop, Oregon, December 7, 1805 to March 23, 1806. Lewis and Clark had hoped to return by ship, however no ships were sighted and they began their return on March 23, 1806. They arrived in St. Louis to the surprise of everyone who thought the party had perished.

The influence of the work performed by these respected British surveyors and astronomers was not fully realized until the line they surveyed was inextricably woven into the history of the Civil War nearly 100 years later. The conflict of land ownership which predicated the request for their services dated back to the colonization of Pennsylvania by William Penn in 1681. The “Mason-Dixon Line” (the boundary between Pennsylvania and Maryland running between lat. 39°43’26.3″N and lat. 39°43’17.6″N) became an icon of American culture when it began to be recognized as a line that divided the “free states” from the “slave states” during the debates in Congress over the Missouri Compromise in 1820.

The ambiguous description of the boundaries in the Maryland and Pennsylvania charters led to a protracted disagreement between the proprietors of the two colonies. The dispute was submitted to the English court of chancery in 1735. A compromise between the Penn and Calvert families in 1760 resulted in the appointment of Mason and Dixon. By 1767 the surveyors had run their line 244 mi (393 km) West from the Delaware border, every fifth milestone bearing the Penn and Calvert arms. The survey was completed by others to the western limit of Maryland in 1773.

In 1779 the line was extended to mark the southern boundary of Pennsylvania with Virginia (the present-day West Virginia). Before the Civil War, the term “Mason-Dixon Line” popularly designated the boundary dividing the slave states from the free states, and it is still used to distinguish the South from the North. 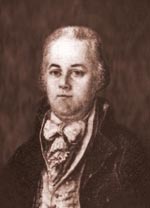 A commissioned officer in the Maryland militia, Major Ellicott was a highly accomplished surveyor having gained experience by working on the survey which extended the Mason-Dixon line westward to its originally intended terminus at the southwest corner of Pennsylvania in 1784. Mason and Dixon had been forced to halt their work in 1767 due to the threat of hostile Indians. Subsequently, Ellicott was hired to establish the western boundary of Pennsylvania, a line that came to be known as “Ellicott’s Line”.

In 1789, Virginia and Maryland had joined in donating territory to establish a new federal capital city on the banks of the Potomac River. At the suggestion of President Washington, Secretary of State Thomas Jefferson asked Ellicott to perform the survey of the District of Columbia. Ellicott and his assistant, Benjamin Banneker, began work in the spring of 1791.

The following year, Washington asked Ellicott to finish Pierre Charles L’Enfant’s plan for the city. L’Enfant was a military engineer appointed by President George Washington to plan the new nation’s capital city in March 1791. L’Enfant had been dismissed from the project because his perfectionism made him difficult to work with, however, his unwavering dedication to perfection shaped a plan of such genius that it survived and even ennobled the architectural mistakes of many who came after him.

Ellicott found it necessary to make some changes to L’Enfant’s plan. He changed the alignment of Massachusetts Avenue, eliminated five short radial avenues, added two short radial avenues southeast and southwest of the Capitol, and named the city streets. In less than one month Ellicott had a plan ready for the engravers. A few months later Ellicott, like L’Enfant, found himself at odds with the Commissioners and resigned from the project.

In 1796, Ellicott accepted the position of Commissioner of the survey of the international border between the U.S. and Spanish territories in Florida. In 1813, he was appointed by President Monroe as an instructor of mathematics at the Military Academy at West Point. In 1817, he was called on to be the astronomer for the United States as part of the proceedings of the treaty of Ghent, establishing the Canada – U.S. boundary concluding the War of 1812.

African-American farmer, self-educated mathematician, astronomer, and surveyor. Although he received little schooling, Banneker demonstrated exceptional scientific ability and taught himself advanced mathematics and astronomy. In 1789 U.S. President George Washington appointed Banneker to the commission charged with the survey, planning and construction of Washington D.C. With Major Andrew Ellicott, he helped to survey the site of the national capital between 1791 and 1793.

Surveyor, astronomer, calculator, clock builder and instrument maker, David Rittenhouse was a highly respected scientist during the formative years of the United States. Along with Andrew Ellicott of Virginia and James Madison, Rittenhouse represented Pennsylvania on the extension of the Mason-Dixon Line to Ohio in 1784. Subsequently, he continued on as commissioner during the survey of the west line of Pennsylvania. Rittenhouse had run the circular boundary between Pennsylvania, Delaware, and Maryland (a circle of 12-mile radius, with Newcastle as its center), and had established a point at 42º north latitude for the beginning of the westward line dividing New York and Pennsylvania.

The Rittenhouse surveyor’s compass was of such superior design and construction, that its use was specified in the U.S. Surveyor General’s instructions to deputy surveyors for many years. In fact, its use continued until sometime after 1836, some 40 years after Rittenhouse’s death.

Explorer, army officer, surveyor and politician – noted for his explorations of the Far West.

After his commission as second lieutenant in the U.S. Army Corps of Engineers in 1838, Fremont worked as a surveyor in the mountains of Carolina, and joined French explorer Joseph Nicolas Nicollet on his expedition that mapped the region between the upper Mississippi and Missouri rivers. In 1841, he commanded a US Topographical Corps (later the U. S. Army Corps of Engineers) survey of the Des Moines River in Iowa. Between 1842 and 1845 Fremont led three surveys of Oregon Territory where he met frontiersman Kit Carson, who became the guide for his expeditions.

During his first western expedition in 1842, he explored the Kansas and Platte rivers, charted the location of South Pass, Wyoming, and climbed Fremont Peak in the Wind River Mountains. In 1843, on his second western expedition, he explored the Medicine Bow Mountains of southern Wyoming, and was unsuccessful in his search for an alternate east-west route through the Rockies. He continued on to explore the Great Salt Lake and the eastern Cascades to Pyramid Lake, Nevada. This expedition lasted into 1844, exploring Utah’s Great Basin, the Wasatch and Uinta Mountains, as well as Utah Lake, and locating Muddy Pass through the Middle Rockies and charting the Great Basin.

Fremont’s third western expedition, in 1845-47, crossed the Great Basin to Walker Lake and the Sierra Nevada into Northern California. After exploring Klamath Lake, he returned to California for the Mexican-American War of 1846-48. His fourth western expedition, following the war, sought a route to the upper Rio Grande through Sangre de Cristo and San Juan Mountains of northern New Mexico.

In 1850, Fremont was elected as one of the first two senators from California. But by 1853 he was on his fifth western expedition, returning to the Wasatch Mountains and the Sierra Nevada Mountains scouting for a proposed railroad through northern Utah.

Fremont was the presidential candidate of the newly formed Republican Party during the election of 1856, but he was defeated by Democrat James Buchanan. In 1864, he was again a presidential nominee, but withdrew in favor of President Abraham Lincoln. He served as the territorial governor of Arizona from 1878 to 1883.